It’s been quiet here on the blog, but we’ve been busy behind the scenes. In 2014, we revamped our data management procedures and structures. Season 7 — the one you finished classifying most recently — was the first where images and metadata were fully pre-processed and vetted before being sent to the Zooniverse. This pre-processing makes things much easier on us after we get all your classifications back from Zooniverse. But it does add some lead time.

Season 8 is the first good news. We’ve been pre-processing all December, finding weirdnesses like 84 images in a row all with the same timestamp, miscellaneous video files, timestamps from the future, and so forth. We are just about to start sending the images to Zooniverse, a processes which takes a few days. You should see Season 8 up within a couple weeks. We’ve also tweaked the interface a tiny bit. More on that soon.

The bad news is bad. After waiting since August for a reply from the National Science Foundation about our most recent grant proposal, we finally got it at the very end of December: declined. That means that we are again scrambling to find funds to keep the cameras rolling for 2015. And this time without much warning.

Season 8 is the first half of 2014 and Season 9 is the second half of 2014. Those are already in the bag. The cameras are rolling right now, and so there will be at least something of a Season 10. Worst case scenario is that we have to shut everything down for a while until we get more funding. But Craig is working hard to find interim funds.

The other good news is that we’ve been talking with some other Serengeti researchers who have set up a small camera trap survey in the western part of the ecosystem. They have tons of images and we’re talking with them about putting their images up on Snapshot Serengeti for classification. These images would be of new locations in the Serengeti and potentially a few new animal species. Could be a lot of fun. So even if there’s a pause in our image collection, hopefully we’ll have these other images to classify from the Serengeti that will be useful for ecological research.

Season 7 is up and running, and we’re already running into some interesting critters!

No, that’s not a house cat wandering through the middle of the savanna. If you check out the gigantic ears, it appears that we’ve caught sight of a melanistic serval! Melanism involves a genetic mutation that causes the development of dark pigments in the skin, like a reverse albinism. For comparison, these guys normally look like this:

According to our field assistant, Daniel, the serval population is booming in the Serengeti at the moment. Perhaps with so many animals, it’s not entirely unexpected to find one or two odd cases like this.

Let’s see what other interesting finds pop up in the latest season of Snapshot Serengeti!

It’s been a long time coming, but it’s really and truly here.

First, we have to reiterate that Season 7 would never have been possible without your help. Last summer, our long-term National Science Foundation funding ran out and we were facing a gap in funding that could have closed down the camera survey forever. We launched the Save Snapshot Serengeti campaign to make sure that Season 7 happened — and because of your support, it did.   Thank you, again, for making this project possible in so many ways.

And now! The hard won photos of Season 7 are here.

Season 7 is a big one, running from May 2013 all the way through to the end of November. That’s 7 months! In that time, the long rains faded and the roads became dusty.  Stan, whose face you’ve seen so many times checking cams

began a master’s program in Dar es Salaam, and Norbert took over checking the cameras in his place.

Back in Minnesota, Margaret defended her dissertation and began a new post doc at Harvard working with the Phenocam project. I’ve been frantically analyzing data from Seasons 1-6 to finish my dissertation. And Meredith became the newest member of the Snapshot Serengeti team.

So, stop whatever you’re doing for a few minutes and go check out Season 7. Because really, whose day *isn’t* brightened by photos like this?

What we’ve seen so far…

As we prepare to launch Season 7 (yes! it’s coming soon! stay tuned!), I thought I’d share with you some things we’ve seen in seasons 1-6.

Snapshot Serengeti is over a year old now, but the camera survey itself has been going on since 2010; you guys have helped us process three years of pictures to date!

First, of the >1.2 million capture events you’ve looked through, about two-thirds were empty. That’s a lot of pictures of grass!

But about 330,000 photos are of the wildlife we’re trying to study.  A *lot* of those photos are of wildebeest. From all the seasons so far, wildebeest made up just over 100,000 photos! That’s nearly a third of all non-empty images altogether. 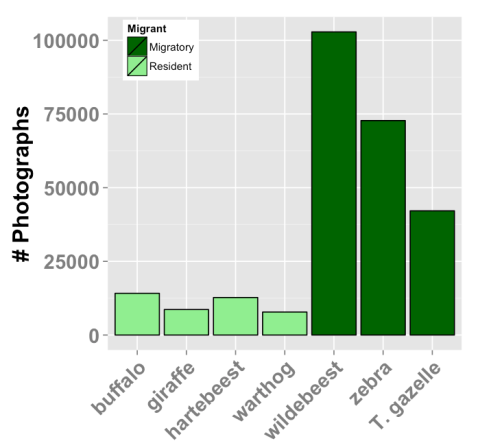 We also get a lot of zebra and gazelle – both of which hang out with the wildebeest as they migrate across the study area. We also see a lot of buffalo, hartebeest, and warthog — all of which lions love to eat. 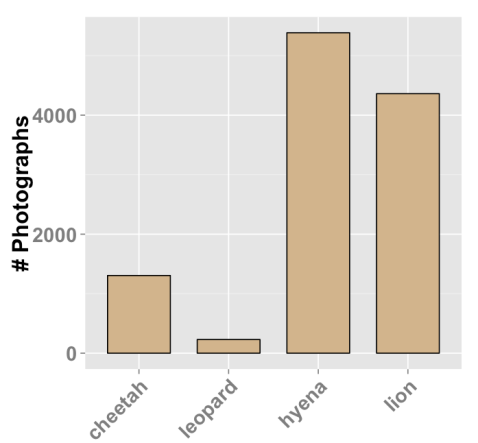 We also get a surprising number of photos of the large carnivores. Nearly 5,000 hyena photos! And over 4,000 lion photos! (Granted, for lions, many of those photos are of them just lyin’ around.)

Curious what else? Check out the full breakdown below…

I recently returned from Serengeti with all of my limbs intact and hard drives full of camera photos in tow. The images on these drives comprise Season 6 – the season I welded spiky nails to the cases to discourage hungry hyenas from chomping on them, didn’t get stuck every 3 days for a change, and also my last trip as a Ph.D. student. (Now I’m back in Minnesota trying to make sense of all the data and write my dissertation!) The Season 6 images are slowly making their way through the cloud to the Zooniverse team, and we’re expecting to have them online by the end of the month.

Unfortunately, things are not all butterflies and rainbows for us. In fact, Season 6 will mark a rather dire situation for Snapshot Serengeti. As Margaret wrote back in May, our National Science Foundation funding has run out – and our application for renewed funding was rejected. Unless we raise enough money to keep our Land Rovers limping along, our cameras will turn off, and we’ll lose our secret window into this incredible world.

The good news is that we have a plan. Today we launched a crowdfunding campaign on Indiegogo, our first step in keeping the project going. We are asking people around the world to help us raise money to keep the Snapshot Serengeti cameras clicking for another three months after our funding ends in September. That will get us to the end of the year and give us a Season 7.

So, if you love Snapshot Serengeti and are able to contribute something, we’d love your support. And check out our perks. We’ve got some fun ones you might enjoy! If you’re unable to help out financially, please spread the campaign link around to your friends and family. The more people we reach, the more likely we are to make our goal. The link is

And meanwhile, happy hunting in Season 5. Thanks!