One of the reasons I love working in conservation is the remote places it brings you to sometimes. Although born in London I am not a city person and haven’t lived in something even as big as a town in around 20 years. I am happiest wandering around in the bush observing animals in all their splendour without the addition of people.

So believe me when I tell you that my assignment in Chinko nature reserve was remote.

To get there you take a 2hr 30 min flight by light aircraft from Bangui, the capital for nearly 1000km. Of course you could drive if you have the time and a strong sense of adventure, the roads, however are impassable in the wet season. Road blocks are rife in a country where ethnic tensions are high. The route takes you through towns that only UN convoys dare try and pass.

The last half hour or so you are actually flying over the reserve itself. At 17,600 sq km it is enormous. There are no settlements in the reserve boundaries and the nearest village, Bakouma, is a bone shattering 12 hour drive away that includes a ‘ferry’ across a wide river. This is the nearest place for any supplies and also where most of the staff comes from. Bearing in mind that again this road is all but impassable during the 5 month rainy season when mud can mean it takes three hours to drive 5 km. Watching the plane trundle down the dirt runway as you stand there with your bags can insight a momentary sense of panic in many first time visitors here.

Of course getting there is not the only problem. Moving around the reserve is just as difficult. The habitat is a mosaic of tropical lowland rainforest and forested savannah which translates to very tall grasses and many rivers with thick tangled vegetation, not at all easy to drive through let alone walk through.

Me in the jungle 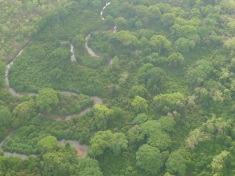 On one occasion I set out with the resident biologist to put out camera-traps. We drove all morning, checking for likely spots. Around midday we had to ford yet another river; as the car gingerly entered the water it suddenly slew to the left and sank notably. We were stuck and guess what? we had been assigned a car with a winch that did not work.  After an agonising hour or two trying to get ourselves unstuck Thierry decided it was time to call in a rescue only to find his sat phone was having network issues. There was nothing left for us to do but start walking. It would be a 25km walk back to base, with all the streams and rivers water at least was no issue.

As we had no choice but to walk, Thierry, ever resourceful, suggested we treat it as one very long transect and record all that we saw along the way. It certainly kept my mind off the heat and dust anyway. How wonderful to just walk and see no signs of humans anywhere, only nature. It was better than being in the car where you heard nothing over the engine. Somewhere out in the middle of that walk we stumbled on a massive sinkhole about 30 meters deep and 50 meters diameter. Buzzing all around was a large colony of red-throated bee-eaters, not known to breed in Central African Republic these birds had obviously not read the books because they were flitting in and out of nest holes in the walls of the sinkhole.  As we watched the show the bee-eaters put on for us I reflected that perhaps we were the only humans, certainly in recent history to have observed this spot buried deep within a very large isolated corner of  Africa. It is a humbling experience to discover nature in its undisturbed state and I never tired of exploring Chinko’s river systems and forest clearings. Stumbling upon giant trees or ancient salt licks carved by forest elephants or just watching troops of monkeys and flocks of hornbills passing through the canopy above was manna for the soul.

As we approached base camp and the noise of industry kicked in, generators, cars, people, I had to mentally re-adjust bolstering my courage to deal with everyday camp life again thankful that something as simple as a stuck car could have afforded me a little more time cocooned from the real world.

The biggest tree roots ever

This season has turned up quite a few images with a central square that is brighter than the rest of the frame with a luminous look. These somewhat Warholesque images look as though they have been photo-shopped and I love them. Here are just a few. My favourite is the zebra, its perfect. 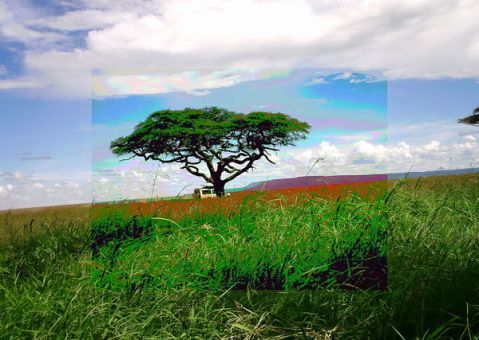 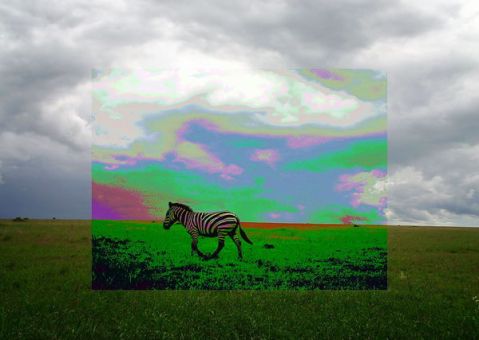 Obviously these are not some new form of art but have a more down to earth source; a malfunction with one of the camera trap types. A patch provided by the manufacturer restores the image to normal which for scientific purposes is very good but from the purely aesthetic side its kind of sad, I like “The Square”

Here is another pair of antelope that are often muddled up on Snapshot Serengeti; topi and hartebeest. These two share a similar size and body shape and for those of you not familiar with them they can prove a bit tricky.

Topi and hartebeest belong to the same tribe, Alcelaphini, which also includes wildebeest. These antelope typically have an elongated face, long legs, short necks and stocky bodies. Although these antelope have reasonably large bodies their long legs mean they have retained the ability to run fast, a good adaptation for life on the open plains. It is believed that the long face developed in place of a long neck in order to reach the grasses they consume.

There are several species of both topi and hartebeest in Africa, two are found in the Serengeti. Coke’s hartebeest or kongoni (Alcelaphus cokii) are selective grazers with browse making up less than 4% of their diet. Serengeti topi (Damaliscus jimela) are 100% grazers

In both species males are territorial but topi also form leks from which to display to passing females. Males holding territory close to the lek are more desirable to females. Dominant females will actively prevent subordinate females from mating with these males. 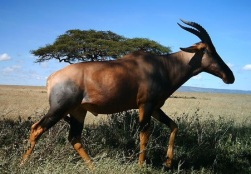 So side by side we can see that the topi is much darker coloured than the hartebeest with distinct sandy socks up to its knees and conspicuous black patches on the thighs and shoulders. In contrast the hartebeest has pale legs and underbelly with a darker upper body. The paleness forms a patch on the top of the thigh. 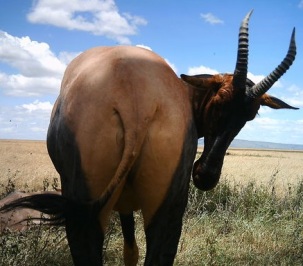 From behind the contrast between leg colour and backside is very obvious with topi sporting dark legs with pale rump and back and hartebeest pale legs and rump with dark back.

Horn shape is also different. A topi’s horns sweep up and back whereas a heartebeest’s sweep out to the side before kinking back. They also sit on a prominent bony ridge on the top of the head.

Hopefully this will help you tackle all the images waiting on season 10.

The Zooniverse team are super busy at the moment but hopefully very soon season 10 will be loaded and we can all get cracking with what promises to be a fantastic season full of amazing images.

In the meantime I thought I would post a few notes on those tricky animal pairings that seem to have more than a few people stumped when trying to id them.

To kick it off we will look at Grant’s gazelle and Thomson’s gazelle. If you were treated to perfect photos every time I think you would get the hang of these two pretty quick but with the often blurry or distant images we get on snapshot they can be tricky.

A; First off there is the overall colouration. Thomson’s has a thick dark stripe across its side, Grant’s usually lacks this but be aware as some Grant’s have a dark stripe too. Not the best distinguishing feature as there can be quite a bit of colour variation. 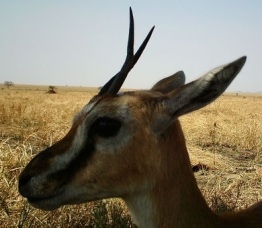 B; A better distinction is the facial markings. Grant’s gazelle has a thick black stripe running along the side of the face from the nose passing through the eye to the base of the horns giving a masked look. Thomson’s has the same stripe but it ends at the eye, not passing through. The white band on top of the black stripe is more distinct on Grant’s. 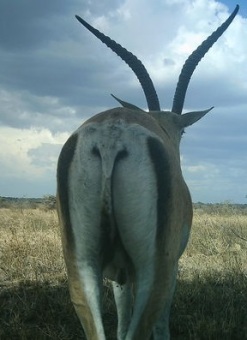 In a mixed group the smaller size of Thomson’s is evident, although with young animals it is not so obvious.  Here you can easily see most of the features discussed above with the Grant’s gazelle comprising the 7 animals to the right back and the Thomson’s gazelle to the left forward. Note the Grant’s gazelle side on at the back, it shows a much darker side stripe than the others more a kin to Thomson’s. Males and females of both antelope have horns with the females usually shorter and thinner. In some females horns are absent. In general Grant’s are more graceful looking than the stocky Thomson’s.