The lost lions of the Transect Steady pride

### Today we’ve got a guest post by our very own Daniel Rosengren, lion tracker (& photographer) extraordinaire. ###

It started with some mysterious footprints around the Loliondo Kopjes. There were a lot of fresh paw marks in the mud following the road. I could tell it was a big pride but the only big pride with a territory nearby was the Young Transects. But I could not hear their collar. Neither could I hear any of our other prides. I drove around for a while looking for lions, especially on the rocks and under trees. I didn’t find any and guessed it could have been the Young Transect lions anyway, only without the collared female.

A couple of weeks later I was headed out east when I soon caught eye on a big group of lions. As I drove closer I realized they weren’t any lions I knew. I tried to get photos of all of them but it wasn’t easy knowing who you’d already got in a group of 17 lions. Luckily they all started walking along the track. All I had to do was park ahead of them and take photos as they passed one by one. Once I had photos of all their left sides I went home to try to figure out who they were. 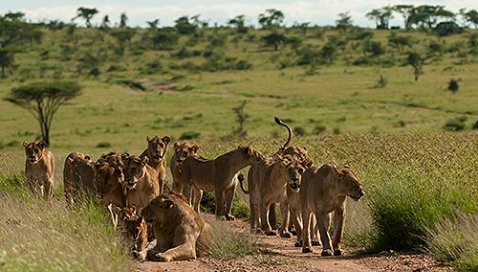 I concentrated on the older females as the youngster probably never had been seen before by the Lion Project. After a while I found a couple of matches. It was TR86 and TSF from the Transect Steady pride, not seen since December 2009, almost three and a half years earlier. But the last time they were seen regularly in our study area was in 2008.

Now I contacted TANAPA and the vets to organize a collaring of one of the females. They were coming. I drove back to the place where I’d seen the lions and hoped they hadn’t walked too far. I found them in the shade of a tree. Then a long wait started for the vets to organize themselves and drive all the way from Fort Ikoma. Once they came, the collaring went smoothly, the rest of the pride watching from a distance. 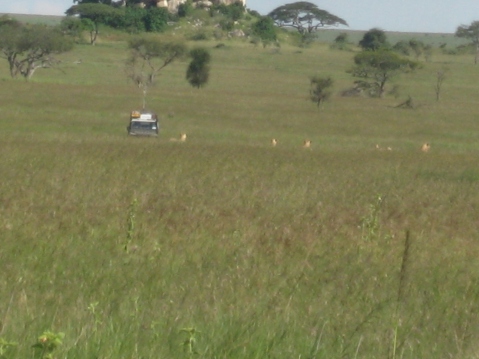 All of the lions of the TS pride, watching us warily as we try and create enough space to safely collar our lion. 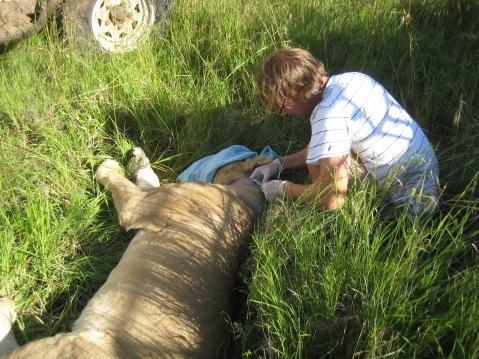 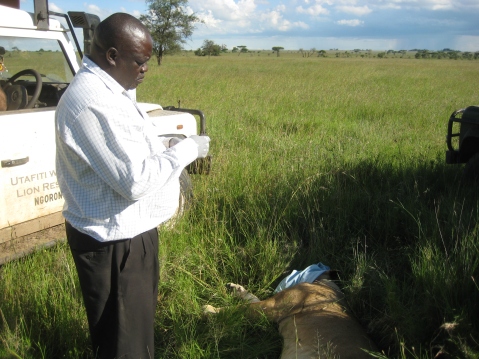 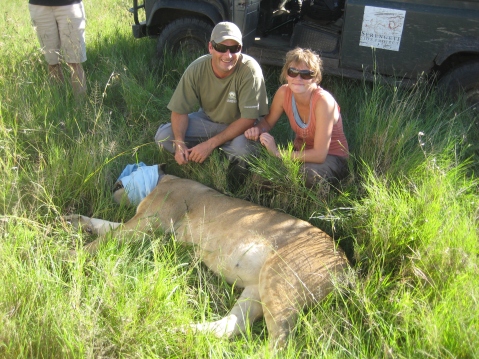 It’s pretty exciting to to be this close to a lion. Their paws are BIG.

About a week later I found the pride just outside the northern edge of our study area along the Pipeline track. Two more old females known since before had joined them, TR93 and TR106. Then they disappeared. So two weeks later I decided to search for them and drove along the Pipeline track north. But instead of driving on the actual track, which in many places was disappearing because of little use, I drove parallel to it, hitting all hilltops to be able to pick up the radio signal from a greater distance. The drive was terrible as the hills in the area are specked with large rocks and I had to drive dead slow. I held on the the steering wheel as little as possible. Having no power steering means that every time I hit a rock I risk breaking thumbs or worse.

I picked up the signal after a while but I still had to pass several hills before finally finding them, right by the track at a river confluence. That was quite far north of our study area and too far to go and see them on a weekly basis. The future will have to show where they finally settle.

#### Today’s guest post is from Daniel Rosengren, one of the full-time field researchers on the Serengeti Lion Project. ####

The prettiest lion born in our study area lately got the code name “SPQ”. “SP” because she was born in the Spurs pride and “Q” because that’s the order she was born, starting from A. Fittingly, her more personal name thus became SuPer Qt (Super Cute). One might think that lions all look alike. But SuPer Qt definitely stands out with her striking looks.

The other day I found the still young SuPer Qt together with her mother and another adult female. They were resting in the tall grass, at least the old females were. SuPer Qt sat up scanning the plains around her for anything to eat. Suddenly lightning struck really near. Close enough not to give a thundering sound but a very loud bang. SuPer Qt jumped while the adults didn’t even react.

After the rain passed SuPer Qt spotted two warthogs in the distance and started stalking. She’s young but not too young to participate in hunts. The other females lifted their heads, saw the pigs and followed suit. I drove around in a big semi-circle to get closer without disturbing. The lions were lucky, the hogs walked straight towards them. Then their luck vanished, just like the warthogs down a burrow. At first, the lions seemed confused and looked around widely as they slowly pushed forward. I don’t know what gave the hiding place away but once the lions came within about 15 meters of the burrow they instantly knew the hogs were there.

All lions took turns digging. The two older and more experienced lions dug with more force and determination. SuPer Qt seemed to dig more randomly. Her inexperience showed in more comical ways too. Twice she managed to place herself in a position behind a digging lion, getting her face full of dirt. Another time she circled the burrow and instead of walking around the oldest female she decided to walk under it. Something got SuPer Qt’s attention down the hole and she stood up while still under the old female who got her hind legs air borne. The old female was too busy looking down the burrow to seem to notice. They stood like this for a good while until the old female ungracefully, one leg at the time, managed to get her hind feet on the ground again. 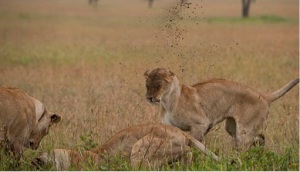 SuperQT getting a face full of dirt 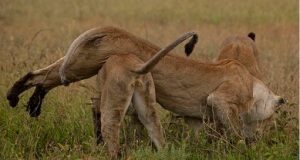 After a long time of digging, the lions finally gave up. They lay down about 20 meters from the hole and rested. Half an hour or so later, the warthogs emerged. They were watched by the lions as they walked away but never had to run for it. The warthogs lived to see another day and must have had a very thrilling time.