The last month has seen a new batch of Snapshot Serengeti Images uploaded to the Zooniverse. There seems to be a high portion of really stunning images amongst the 40000 odd that were uploaded in this batch. Now there is no rhyme nor reason for this as the camera-traps are impartial, they simply snap away when an animal triggers them. It is pure luck if the resultant image is a perfect portrait or a tip of a horn or tail.

Of course, as scientists we don’t so much care about pretty pictures as being able at least to id the animals involved but no one is immune to a great image and so we at Snapshot Serengeti give a great big thanks to the animals of the Serengeti for being so cooperative when it comes to our camera-traps.

As you classify the images do remember to flag any really special ones for everyone to enjoy.

Christmas is approaching and so from all the team at Snapshot Serengeti Merry Christmas. Its been a big year for us moving over to the new system and joining up with Snapshot Safari, thanks for sticking with us through the teething problems and a big thank you for all your classifications over 2018.

Data collection is the back bone of field research work and can sound glamorous and exciting to those who are office bound but I will let you into a little secret, it can be exhausting and frustrating and unrewarding too.

Firstly, you have to remember that researchers often work in remote places and whilst this is amazing it does lead to some logistical nightmares. Take for instance my recent experience. My task was to visit 18 Ilchokuti or lion guardians from KopeLion to collect the data they had recorded during the previous month. Now they are spread out over 1300k2, in itself quite a distance but when you factor in the rough at best, non-existent at worst roads you begin to have an idea of the task. I would be lucky if it didn’t rain, that would only add to the woes. Another thing to remember is that, barring a few lucky people working for high profile organisations, most researchers have to nurse their aged vehicles along, fixing things as you go. This trip wasn’t too bad as we seemed to only suffer from door catches failing so nothing a bit of string or a Leatherman wouldn’t fix. The budgets just never seem to run to decent cars.

Just as I was about to feel smug about the lack of rain hampering our journey it dawned on me that dry conditions held their bad points too. Dust! The fine dust covering some of the landscape here is deadly. It penetrates everything and with a three-day trip planned with no opportunity for a shower, boy does it get tiring. Forget enjoying the scenery as you drive, you mostly feel as if you are in a cloud only with a yellow tinge that makes it hard to breath in place of the fluffy white.

Anyway, I can’t really complain it was a wonderful three days and meeting up with a couple of our guys in the middle of nowhere under a great baobab tree acting as our office for an hour or so was something to make you smile. 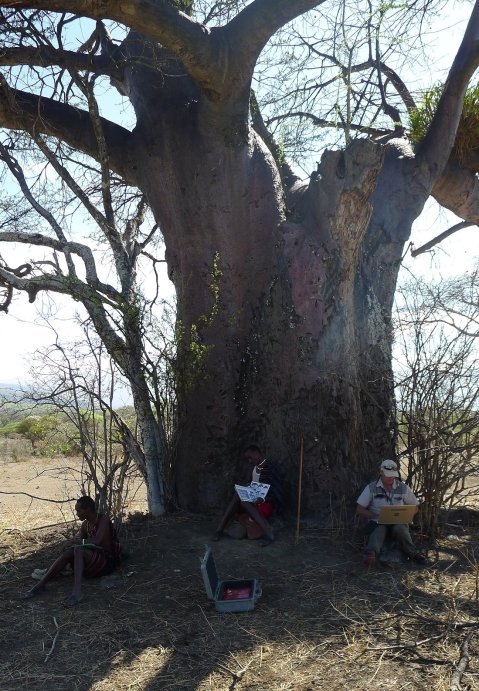 My colleague, Meritho Katei, over in the Serengeti has an even harder job under similar conditions. I was simply rendezvousing with other people, collecting and issuing data sheets and downloading GPS data. Meritho is trying to pick up on the lion monitoring for the Serengeti Lion project that has been on hold for a while.

His task is to reconnect with the prides of lions previously being followed and studied and to catch up on the family histories. New members need to be identified, files made on them and changes in pride composition noted. He is working with the Snapshot Serengeti camera trap data to see where the prides are hanging out but of course we aren’t quite up to date with the classifying so that’s not the greatest help. Instead he is relying on a lot of kilometres driving, following up on tourist sightings and tracking data and a good set of eyes to track down the prides and observe them.

So as I washed the dust out of my hair, luxuriating in a hot shower after my three day successful, mission accomplished trip, I had to reflect that poor Meritho was in for many months of hard slog catching up with those lions and with the rains coming things are about to get even harder. Good luck Meritho! 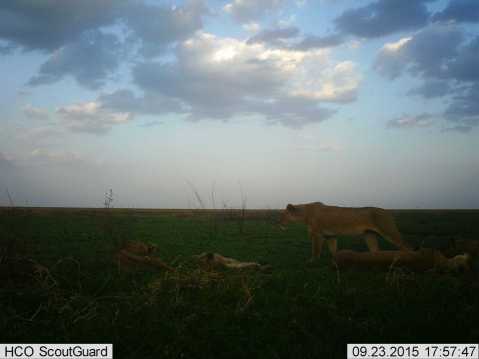