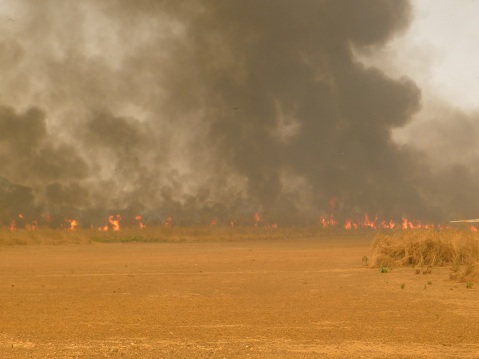 Fire ecology is a fascinating subject. I always get a bit of a buzz when I find a fire image in Snapshot Serengeti. Fire is a major component of savannah ecosystems and the grasses and trees within them have evolved along with fire, some to such an extent that they cannot exist without the occasional burn. I will return to this topic in a future blog but for this week I want to recount my personal experiences of the fire season in a remote Central African nature reserve.

As the dry season progresses the deep verdant greens start to fade to yellow, the temperature mounts into the high 30’s and the strong Harmattan winds pick up. The landscape is a mosaic of tall savannah grasslands divided by fingers of thick lush riverine habitat. The climatic conditions bring violent lightning storms which, given the tinder dry grasses, can trigger natural bush fires. Of course this process is random, not every patch of grass will burn every year unlike the human induced fires that sweep this part of Central African Republic year after year.

Historically this area saw very little pastoralist activity due to the tsetse fly (lethal for cattle) but in recent years Sudanese cattle herders are flocking to the area during the dry season driven by increasing desertification in Sudan and availability of medicine to combat the effects of tsetse fly for their cattle. They set light to every bit of grassland in order to make movement easier creating a green flush for their cattle to feed on and to make hunting for bush meat simpler.

Each day our plane goes up searching for signs of the approaching herders. We all anxiously scan the horizon for signs of smoke. The weeks drag on like this with everyone under a nervous tension waiting, waiting for something to happen. One day the pilot returns having spotted a huge fire to the north and just like that it has started. Every flight brings more fire reports and we see a daunting change in the clearness of the air around us. Sitting in the central base looking at the fire map it seems we are now surrounded by either fires or herds of cattle numbering in the thousands. With the scent of scorched vegetation getting stronger by the day things start to feel very claustrophobic.

By night we see an ominous glow to the horizon as the distant fires glow and we dread the change of wind that could bring the wall of flames towards camp. We have a wide airstrip almost a kilometre long so I know that we will not be in danger of being burnt alive but it does not quell the primal fear.

The day I have been dreading finally comes. Fire is spotted 5km from the camp and it is racing towards our fire break, a team rushes out to light a back burn to try and stop it in its tracks but the wind does us no favours and within hours we can see the flames as they burn behind the camp perimeter. I am feeling panicky but although it looks like Dante’s inferno the danger has passed as the fire makes its way along the north side of the airstrip. Then disaster strikes the wind, capricious as ever, changes direction just as the fire reaches the end of the airstrip and a great gust of hot ash and embers jumps the fire break and the fire starts racing up the south side of the airstrip. And all hell breaks loose; we never expected it to get into this block. The fire is now making a bee line for our temporary accommodation camp and my own tent. Never have I run so fast, 400 meter sprint in 40 degrees heat in a herculean effort to reach my tent and evacuate my worldly goods. I wrench open the canvas and start madly flinging stuff into bags, meanwhile some clever person arrives with a wheel barrow and we start moving the bags to the safety of the airstrip.

Once everything is safe I sit down and watch the chaos from atop my possessions. It is a scene out of apocalypse now. There is a helicopter and cargo plane belonging to the American Special Forces grounded on the airstrip. Smoke rises in front of me like a billowing curtain, our staff are running around beating out flames as they try to control the back burn. In the midst of this someone brings me a very angry chameleon, rescued from the path of the flames. There are gun shots ringing out from the Ugandan army camp who, instead of helping us, are trying to shoot rabbits and other small game as they dart from the onslaught of flames. Our guys win the battle and the fire comes to a slow stop just 70 meters from my tent. My heart has calmed down now but it is with sadness that I look around me at the blackened ground. I wonder how many chameleons and other small creatures lost their lives in this battle.

That night I slept once more in my tent. I lay there watching the beautiful glow of the fire through the trees, looking just like a glowing sunset. The spitting of flames and the cracking of exploding trees reminding me of the truth but the fire was on the other side of the strip of riverine trees and I knew its rich damp interior would keep me safe as well as countless other birds and animals that night.

Click here to see drone footage of the fire heading towards camp. https://youtu.be/WtRj8u7vEts 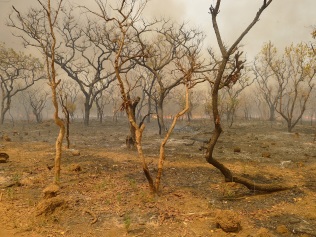 Not a sunset but flames
Advertisement