Stuck in the Mud

Getting to know the mud of Serengeti has been the major hurdle of my wet season. The mud out here comes, I have discovered, in many different treacherous flavors. Surprisingly, you can get a car through the largest puddles by plowing straight through the middle, but the edges of these small lakes (that you might, say, drive on to go *around* the seemingly-impassible body of water) are death-traps. Silty pale sand on the road is often a sign of stickiness and tall grass can hide all manner of trouble. If the sun happens to bake the right kind of crust on the road after a rainfall, solid ground can collapse right out from under your wheels: as I discovered the other evening, under you go. I had been driving out to an area of the park called Barafu when my journey ground to a halt in two feet of thick mud. 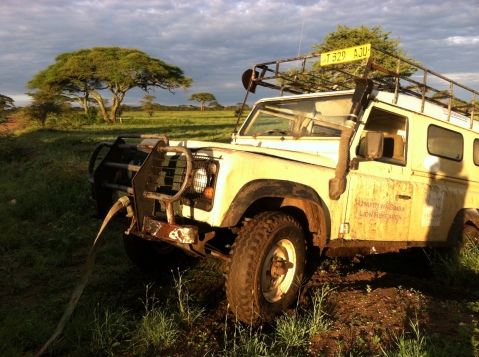 Often, with the right amount of tenacity, you call bully your way through the mud. Locking the wheels, jacking up the car, throwing spare tires and dead trees and rocks and whatever else you can find under your floundering tires sometimes works. If you’re in the right areas at the right time of day, passing tour cars often go out of their way to help you out (a favor I try and return at every possible convenience, building up karma for the next big stick). This particular situation, however, was neither the right place nor the right time. It was early evening, and I was miles and miles away from Serengeti Central. Asking for help this late and this far from our field crew would have been irresponsible and, fortunately, unnecessary — I had been heading out camping that evening to start with, and always keep the car stocked with emergency supplies (sleeping bag, snacks, and, of course, a bottle of Safari Lager).

While it was still light, I tried to make it the kilometer or two to a nearby kopje, hoping that somewhere along the route my cellphone reception would kick in and I could at least send out some coordinates for a tow the next morning. No dice: the sun quickly began to set and I had to beat a hasty retreat to the car. Making the best of an inconvenient situation, I popped the top off of a beer and crawled up onto the hood to watch as the sun drift below the horizon. I almost spilled half that beer down my front when, with a roar, a lion emerged from the grass less than two meters away from where I was sitting.

She was a lone female, a bit scrawny and mangy (I was pretty sure I recognized her from earlier on in the day). Stepping onto the road, she sauntered over to the car, roaring every few steps. Was she calling for the rest of her pride? I couldn’t see or hear any others, and the lioness circled the Land Rover only once before continuing down the road. Clutching my beer, I experienced an emotion I have felt only once before, diving with great white sharks: knowing that you’re safe (probably), in your cage or in your car, but also understanding that you’re out in a predator’s natural habitat – and that those predators know you’re there. I can only think to describe it as an overwhelming sense of respect tinged with adrenaline, followed by an aftertaste of awe and thankfulness when the predator finally passes you by.

Needless to say, as soon as the lioness was a fair distance away, I scooted quickly back inside the car and may have even rolled the windows up a bit. I could hear her roaring for the next hour or so, and based on the footprints in the mud surrounding my Land Rover the next morning, she came back once or twice to check up on me.

On a lighter note, I’d like to make a special shout-out to the six-tour car cavalcade of young university men that took time out of their safari the next morning to drag me out and feed me chocolate bars (perhaps have to get stuck more often…?)

9 responses to “Stuck in the Mud”