First field update! I’ve been out in Serengeti Park for just over a week now, and I’m fairly surprised to report that things are going rather swimmingly. It was certainly my smoothest travel experience from the USA to date: no plane delays (unlike last time), no missing luggage (unlike last time), no egregiously extended stay in Arusha waiting for permits (unlike last time).  To be sure, field life takes a bit of getting used to again. We’ve had spitting cobras in the bathroom, ververt monkeys breaking into my car, and little black flies are out in full force. But the Serengeti this time of year is completely worth it. Last time, my field season only encompassed the dry season, but in the current rainy period, Serengeti is a completely different place. Everything is so green it almost hurts your eyes to look at it. Up in Barafu, along the eastern edge of our camera trap grid, are herds of wildebeest, zebra, and buffalo so large you can hardly believe it. (My first time driving through a herd of buffalo several hundred strong required more courage than I’d care to admit – buffalo are big and mean and certainly warrant a healthy respect. They’ve been known to ram our field vehicles before and cause all sorts of trouble).

There’s a few projects I’m working on this year with the camera traps: first and foremost finishing up the playback experiments I began last season. Every morning for ten consecutive days, I’d head out to particular camera traps and play lion roars, simulating the short-term presence of predators in an area. We see from the camera traps that herbivores start to evacuate from these scary areas (or, “areas of artificially elevated predation risk”, to use a more scientific jargon) for not just days or hours, but periods of up to three weeks! I’m interested generally in the trade-offs that herbivores have to make between avoiding areas where predators are and still obtaining enough resources to get by. Do they only avoid areas where there’s a high chance predators will be, like lion territories, despite all the tasty forage that may be contained inside? Or is the avoidance being exhibited on a finer scale – like days to weeks, rather than months to years, like we’re seeing in this experiment? Perhaps there are some species of ungulates that don’t try and avoid predators on a spatial scale at all, but rather rely heavily on evasive and defensive behaviors when they encounter a hungry carnivore. Hopefully these continued experiments and the Snapshot data in general will help elucidate answers to some of these questions! 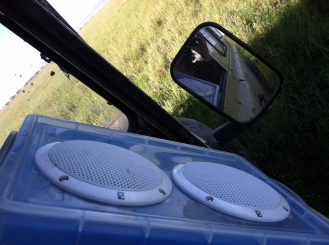 I’m also working on another round of habitat characterization – this time, we’re interested in the soils and vegetation that help to determine the forage quality at a particular site. Now, to tell the truth, I wasn’t originally that enthused about these particular collection tasks, but I’ve discovered that there’s incredibly satisfying about grubbing around in the mud scraping out soil samples. My inner 8-year old is feeling more rejuvenated by the day. Lion House is started to become more than a little cluttered with sample bags of dirt and grass clippings – pole sana, other field assistants, it’s for Science!