You’ve got to check out this game:  http://nightjar.exeter.ac.uk/story/nightjar_game 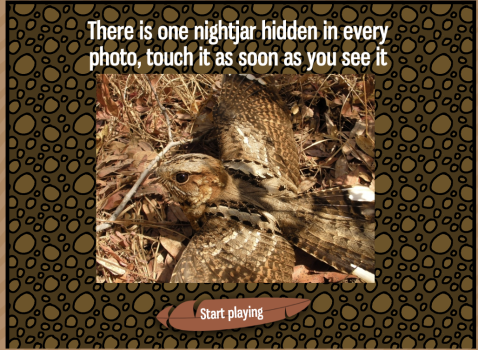 Scientists from the University of Exeter are trying to understand camouflage. Specifically, they want to understand how camouflage helps protect animals from being eaten for dinner, and they’re doing this by studying ground nesting birds in South Africa & Zambia.

Like Snapshot Serengeti, these guys use camera traps too, to figure out whose munching on birds and their nests. Unlike Snapshot Serengeti, however, they aren’t asking for help IDing the photos: instead, they’re asking for help figuring out how predators see, and how different types of camouflage work better or worse against predators with different types of vision.

Humans have trichromatic vision, meaning we have three different types of receptors (light sensitive cells in the eye) that can process color: red (longwave), green (mediumwave), and blue (shortwave). Some animals only have two receptor types and can only see one or two colors, whereas other animals have four, allowing them to see wavelengths such as infrared or ultraviolet that are invisible to people.  Thus, what camouflages eggs against one predator might not work so well against another predator.

What these researchers have done is create a game that mimics the vision of other predators. So you get to see the world through the eyes of either a genet cat (with dichromatic vision) or a vervet monkey (with trichromatic vision), and “hunt” for birds or their nests in a series of pictures. This helps scientists understand how perception changes among different animals, and how camouflage works against different perception types.

So go check it out! But don’t forget to come back and then help us classify Season 7! We’ll announce its debut on the blog soon!

One response to “Find that nest!”