What we’ve seen so far, cont’d.

Playing with data is one of the many things I love about research. Yes, it is super nerdy. I embrace that.

Last week I shared with you the various critters we’re getting to *see* in the Snapshot Serengeti data. Over 100,000 wildebeest photos! Over 4,000 lions! And the occasional really cool rarity like pangolins

But the photographs carry a lot more information than just simply what species was caught in the frame. For example, because the photos all have times recorded, we can see how the Serengeti changes through time.

This graph shows the number of daily pictures of wildebeest and buffalo, and how the daily capture rates change through the seasons. Each set of bars represents a different month, starting in July 2010. Wildebeest are in dark green, buffalo in light green. The y-axis is on a square-root scale, meaning that the top is kind of squished: the difference from 30-40 is smaller than the distance from 0-10. Otherwise, we’d either have to make the graph very very tall, or wouldn’t really be able to see the buffalo counts at all. 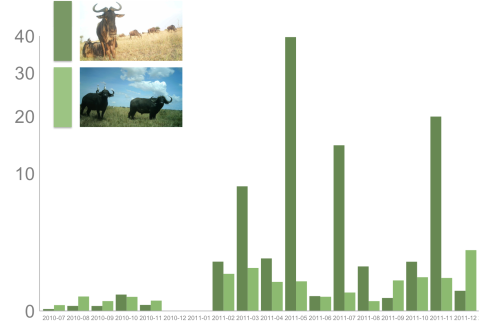 Buffalo are captured more-or-less evenly across the different months. But the wildebeest show vast spikes in capture rates during the wet season. These spikes in numbers coincide with the migration, when the vast herds of wildebeest come sweeping through the study area.