And now for something completely different…

Now, I’m fairly certain that you guys enjoy looking at a nice critter picture or two. Or three. Or a hundred. (Looking over the Zooniverse stats for membership and ID counts is always a humbling and awe-inspiring experience!) To mix it up a bit, and to give you all a better feel for the scientific background I am coming from, here is a taste of what I experienced during my last job before starting graduate school. I worked for the USGS on the Pacific island of Guam, conducting research on the invasive and highly destructive Brown tree snake (Boiga irregularis). 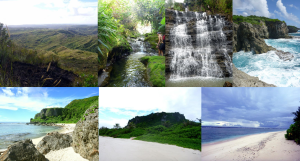 For those of you who aren’t familiar with this case study, the island of Guam was invaded in the 1960s by what was most likely a single pregnant female Boiga. Over the course of the next few decades, this generalist predator caused the extirpation of almost all native forest bird species, destroyed all nesting seabird populations, led to the extinction of 2/3s of the native mammalian life, and contributed to drastic declines and loss of native reptile and amphibian populations. This situation is highly unique in that it was the first (and remains one of the only) situations in which an invasive reptile caused such a degree of ecological damage. There is currently a higher density of Boiga on Guam – 13,000 per square mile – than there is of all combined snake species in the Amazon basin. Snake populations continue to be sustained on invasive skinks and pose not only severe ecological threats to Guam and surrounding islands, but also cost the island economy millions of dollars per year through losses relating to power outages caused by snakes, snake bite hospitalizations, decline in tourism money, the costs involved with ensuring that snakes do not leave the island, and agricultural losses.

A few of the species still on island, including a mangrove monitor, the moth skink, the highly endangered Mariana fruit bat (attempting to nest, apparently, in my hair), and another native skink species, the blue-tailed skink.

While the island itself is beautiful, due to the snake, it was completely depauperate of animal life. It is a Twilight Zone experience to walk through a forest devoid of any natural sounds, without crickets chirping or birds calling. The real beauty and biodiversity of Guam lies underwater, in the coral reefs and shallow oceans that surrounding the island – a place I would retreat to often. 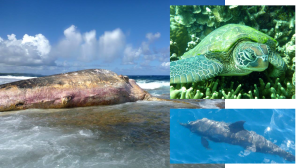 The tropical fish diversity in Guam was absolutely mind-boggling. In addition, nothing would liven up a good snorkel like running into a ferocious eel or a encountering one of these enchanting sharks.

But everybody knows that invertebrates are really where it’s at. Cephalopods! 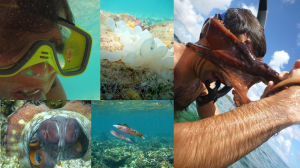 If anyone has questions about the snakes or invasive species situation on Guam, please feel free to ask. I can also highly recommend the USGS Brown tree snake lab website (http://www.fort.usgs.gov/resources/education/bts/) and the excellent book, “And No Birds Sing”, by Mark Jaffe, which documents the process by which scientists discovered the culprit behind these rapid extinctions.

7 responses to “And now for something completely different…”