Meeting of the minds

You’ll have to forgive me if I am less eloquent than I’d like to be. It’s late Sunday night, and my brain is still reeling from one of the most intellectually exciting and intense weeks I think my Ph.D. career has seen.

Right. So. Craig, Meredith, and I spent the last week at the first ever Gordon Research Conference on Predator-Prey Interactions. It was quite the meeting-of-the-minds for ecologists, and I spent much of the week rather star-struck.  See, while much of our scientific careers are spent collecting, cleaning, and analyzing data (not to mention trying to convince funding agencies that they should give us money), a significant portion of our time also goes towards pouring over the thoughts, insights, and experiences of other researchers as they are articulated in scientific journal articles. We are impressed and sometimes awed by their insight. Our own scientific aspirations are shaped by their creativity and vision.

At the GRC last week, I had a chance to meet the movers and shakers who fundamentally shape the way that we ecologists see the world around us…and it was awesome.

Dr. Jim Estes, a professor at UC Santa Cruz, was one of these movers and shakers. Dr. Estes is perhaps best known for his work on sea otters that provided one of the first and most spectacular examples of how a keystone predator could shape an entire ecosystem. A keystone predator is one that plays a crucial role in the larger community, and whose disappearance has disproportionate and dramatic consequences that cascade throughout the ecosystem in what we call a trophic cascade. (“Trophic” refers to different levels within the food web.) 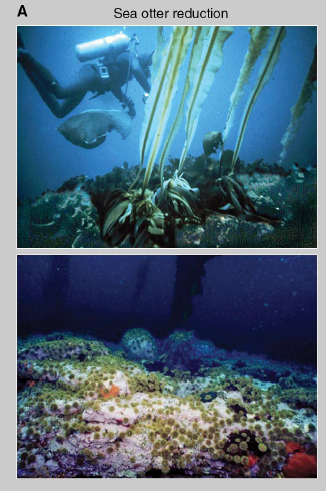 A pacific northwest ecosystem with and without sea otters. From the recently published Ripple et al. (2014) Science article.

When sea otters disappear from pockets of oceans in the Pacific northwest,  the number of sea urchins (which otters love to eat) increases. And sea urchins increase a lot. Without the otters to keep sea urchins in check, the urchins eat up all of the kelp that many fish, crabs, and other underwater sea creatures call home. No otters means no kelp, and no kelp means that a vast array of other underwater sea creatures also disappear.

Otters were recognized as keystone predators back in the 1970’s. But they aren’t the only carnivore that can change the face of an ecosystem. In fact, Dr. Estes presented a “sneak peak” at results from a  review paper that he and colleagues were just about to publish in one of the world’s leading scientific journals.

Their article documents that at least seven of the world’s 31 large carnivores have been found to trigger trophic cascades. Some of these effects derive from the fact that big predators reduce herbivores by eating them. But some of these effects are mediated through “fear” — in which prey animals change their behavior to avoid predation. And some of these changes are because top predators suppress smaller predators, which in turn suppress their prey.

There are many, many ways in which top predators shape the face of ecosystems around the world. Furthermore, as Dr. Estes and his colleagues (all “biocelebrities” and many of whom were also at the GRC!) point out in this new paper, these top predator populations are declining. They are declining quickly and globally, and they are declining as a result of human disturbance. What’s worse is that even though we know that these top predators can have enormous influence over the structure and function of natural systems, we don’t really understand the general patterns that underlie their influence. So as they disappear, it’s anyone’s guess as to how our natural places will change.

It’s abundantly and urgently clear from the recent scientific literature and from the thoughts and interests of ecology’s biggest names at last weeks’ conference that we need to understand how top predators shape the natural world. I’m hopeful that our research here at Snapshot Serengeti will continue to provide tiny pieces of the puzzle towards this scientific understanding. Thank you guys for helping us understand how this amazing world works.