Love, hate, or somewhere in between?

It’s hard to tell whether the hyenas really love or really hate my cameras.

“Camera, you are going *down*” 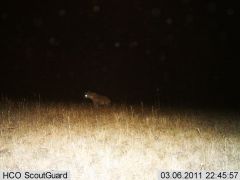 Nope, definitely going down! (Inside of his mouth — see the canine tooth?)

To be fair, I have seen hyenas absconding with everything from flip-flops to sofa cushions – and there was an unforgettable night where our neighbors were awakened by the crashing about of a hyena who had gotten his head stuck in a mop bucket. The world is their chew toy.

One of our favorite things about camera traps is that they are relatively noninvasive – we think of them as candid cameras, unobtrusively watching the secret lives of Serengeti’s most elusive animals.  We don’t bait our cameras to attract animals: we want to capture the natural behaviors of the animals to understand how they are using their landscape – what types of habitat features they prefer, and whether they alter their patterns of use at different times of day, at different times of the year, or in areas where there are lots of competitors or predators.

But it’s a fair question to ask whether the cameras affect animal behavior, and an important one. Stanford graduate student Eric Abelson, is hoping to answer it. If the animals are being attracted to or avoiding areas with cameras, that could change how we interpret our data. In wildlife research, this is known as being trap-happy or trap-shy. For example, say we want to estimate the population size of leopards in Serengeti. Since leopards have unique spot patterns, we can use what is known as Mark-Recapture  analysis to calculate the total number of leopards based on the rates that we “re-capture” (or re-photograph) the same individual leopard.  Because of the way that the math works out, if animals become trap-shy – avoiding camera traps after an initial encounter — then we would overestimate the total number of individuals in a population.

Fortunately, although researchers in other systems sometimes find trap-shy animals (baby tigers in Nepal, for example), our Serengeti animals don’t seem too bothered – at least not to the point where they avoid an area after encountering a camera trap. Even at night, with the flash firing away, we get photo after photo of the same bunch of playful lion cubs, or  repeat visits by the same leopard, cheetah, lion, or hyena week after week. 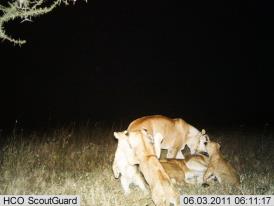 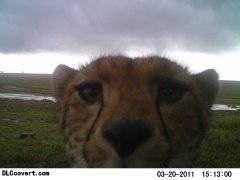 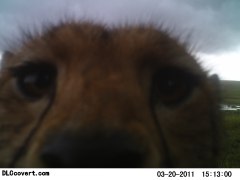 Hope you enjoy the view!

6 responses to “Love, hate, or somewhere in between?”