### I’m traveling to Tanzania currently, about to begin my final field season (which will be Season 6 on Snapshot Serengeti). As usual, I’m running terribly behind getting ready to go – so thought I’d share a blog post I wrote while embarking on Season 2. ###

As I leave Minnesota, winter seems to be already breaking. Amidst the national mid-winter heatwave, mountains of snow are melting, turning the roads into rivers and the hockey rinks back into lakes. For the third time, I am watching cheesy movies across the atlantic, fast forwarding through day and night, racing the sun eastward across the ocean and winning by 30 lengths like Secretariat in the Belmont Stakes. 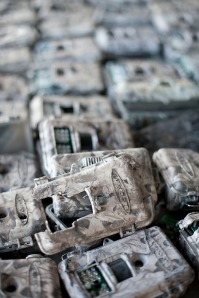 Just some of the many casualties. Photo taken by Daniel Rosengren.

Except this doesn’t feel spectacular anymore. I am on my way to Tanzania, once again, with 240 lbs of luggage catapulting around the belly of the plane. My back feels thrown and the plane feels cramped, and the woman sitting next to me snorts and sniffles like some Sesame Street character.

After three weeks of delays, I’m finally heading…home? I’m dreading – just a bit – the madness that awaits me in Serengeti. A solid three weeks behind, I have 200 traps to place in the next 10 days….which happens to be humanly impossible.

See, my research relies primarily on camera traps – remote, automatic cameras that are triggered by heat and motion, attached to trees so that they take pictures of wildlife night and day. On the street they’re known as “hyena bait.” On my street anyway.

Yeah, that’s right. I’ve discovered that hyenas are like big ugly puppies – the world is their chew toy. However, unlike your neighbor’s cute, squirmy blue heeler, hyenas have no responsible owner to say “No! No demolishing the $200 camera trap!” Last year alone, hyenas ate nearly $8,000 in cameras. I would arrive at my excruciatingly selected camera site to find bits and pieces of plastic, the stray LED, a fragment of circuit board…just no camera. Elephants took down about $5,000 in cameras, but with minimal destruction. They typically ripped the offending trap from the tree and flung it out of site. Those cameras usually worked, with some minor case modifications. But the hyena victims? Beyond repair.

Given the abysmal loss rates from the first year of this ambitious (crazy?) camera trapping study, I am now returning to the Serengeti with replacement cameras and heavy duty steel protective cases…which happen to weigh about 1.35 tons apiece. That might be an exaggeration, but the point is that they are very, very heavy. And hopefully hyena-proof.

It is dark outside, though the fancy seat-back TV map says we are smack dab over the Atlantic. I feel like my mind should be racing with plans for my research, or meandering down memory lane – but mostly I am thinking about how good the red wine tastes, and how tired my eyes feel. The night outside seems endless, the world feels far away and frozen in time – like Zach used to do on “Saved by the Bell” – and in my alternate reality I slip guiltlessly into mass-market movies, into staring blankly out the window, the wine wrapping its velvet fingers around my fraying neurons.

I have a million things to do by…yesterday, but my brain is tired and does not want to work. I do not want to think about where on earth I put my hard drive, or the fact that I have not yet filed my taxes despite my imminent disappearance into the bush. I want to fade into the bright, apoplectic flashes of the action movie’s runaway trains or the feel-good underdog story of the horse that could. When I get to Serengeti, it will be a flat-out race against the rains. I want to get my cameras set before the rains keep me hamstrung for days at a time. Today is Feb 19; the rains start at the beginning of March. Can it be done? I guess we’ll see when I get there.

5 responses to “It begins again.”