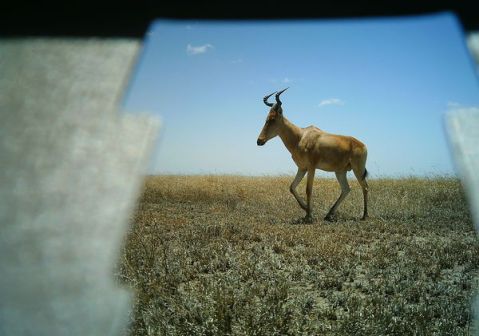 Hartebeest through a dislodged camera-trap cover.

It has been just over a year now since Snapshot Safari was launched. Snapshot Serengeti as the original Zooniverse citizen science camera trap project has remained the flagship project but there are now several other projects under the Safari banner.

One of the good things about joining forces with all these other projects is that collaboration tends to bring perks that operating on your own doesn’t. For example, different areas of expertise that some of us would just never have thought of, being somewhat far from the mind of field researchers and ecologists.

I am talking about the computer learning side of things, ML (Machine Learning) in particular. The team behind Snapshot Safari have been working hard on this aspect essentially to help speed up the rate of classification needed now that there is so much data across different projects.

They have recently engaged a specialist in machine learning at the University of Minnesota who is helping them to develop ML for use with the Snapshot Safari projects.

The idea is to run an algorithm on the data prior to uploading it to the Zooniverse, this will identify most of the misfire and vegetation only images meaning us volunteers will be left with more of the good stuff, the actual animal images.

The algorithm has been trained on millions of images from Snapshot Serengeti, now for these latest batches the team have asked the ‘machine’ to predict which species it is seeing, how many and what the behaviour of the animals is. Don’t panic we really are in the early stages and the idea is to compare what it came up with against the actual results from the volunteers whom we already know are pretty darn accurate. The team doesn’t expect great things yet from the ML and doesn’t foresee computers taking over any time soon but it will be interesting to see how the ML goes.

So, for now things will be continuing as normal, no changes in how you classify or what you do but hopefully there will be fewer blank images with no animals. As the team stresses, they are a looonnng way from machines taking over.

For those of you who enjoy being part of this developmental side of the project the Safari team will soon be launching a side project called Snapshot Focus. It is designed to also look at how well the ML is at recognising animals in trickier images, especially those with multiple animals. If you feel like helping out as a break from the usual work flow it couldn’t be simpler. All you have to do is answer yes/no as to whether the computer has managed to put a bounding box around every animal in the image.

Look out for updates from the team over the coming months to learn more about these developments but meanwhile there are still lots of images to classify on Snapshot Serengeti.

One response to “Machine Learning Update”