The African Buffalo, Success in a Crowd

Lately we seem to have had some great buffalo images. These big imposing beasts aren’t exactly pretty but they have an appeal of their own with their imposing bulk.

The forest buffalo (S. c. nanus) appears quite different being redder in colour and quite a bit smaller weighing around 265-320kg but it is thought that this is in fact the ancestral African buffalo from which the others evolved. According to the IUCN Red-List although the three savannah species appear similar they are at least as different from one another as they are from the more distinct forest buffalo. Defining subspecies is always tricky and apparently there is hybridisation where these different subspecies meet, including between savannah and forest subspecies. I witnessed this when working in the Central African Republic where you could see smaller red ‘forest’ type buffalo intermingled with bigger looking dark ‘savannah’ type.

So what makes African buffalo so special? You would imagine that such a large animal would not seek safety in numbers but this animal is highly gregarious. Herds can reach thousands strong but these tend to be temporary and the usual number is dozens to hundreds formed of clans of related females and their offspring and an assortment of males. The rest of the males form small bachelor herds of 5-10 animals or live alone.

Living in these large herds gives buffalo a certain security and they are highly protective. They are known to chase predators as a herd in order to ‘rescue’ a targeted individual. They don’t hesitate to run at lions if they are threatened. This is to be expected when there are young calves about but buffalo herds are known to extend this behaviour towards injured, sick and even blind herd members. It is so effective that it is actually males not living in large groups, particularly the loners that are most often preyed upon by their arch enemy, the lion. When buffalos are on the move dominant females lead the way with mothers and calves in the centre followed by any infirm individuals and older cows with males forming a protective ring around the entire herd.

Formidable indeed but of course the very thing that allows them to be so aggressive, their size, is also the thing that attracts lion the only true threat other than man to an adult African buffalo.

As a species the African buffalo is listed as ‘least concern’ on the IUNC Red-List due to its widespread distribution. That doesn’t mean that there are not conservation issues. Buffalo are often targeted by poachers for the obvious reason that they provide a rich reward in meat, the usual land reduction is a factor and in areas outside game reserves they are often killed as they compete with domestic cattle for food.

Historically buffalo numbers plummeted in the 1890’s due to the rinderpest epidemic that saw the disease spread from domestic cattle to wild ungulates. The disease continues to have small outbreaks. More recently bovine tuberculoses, again spread from domestic cattle to buffalos, in the Kruger National Park has also caused mortality as well as triggering a cascade of health issues in other animals, in particular, lions who eat infected buffalo. A whole industry has grown up with the sole purpose of breeding TB free African buffalo in South Africa. On the whole though African buffalo are well represented with strong populations in protected areas and as long as these remain their status looks to be stable.

The male and female have large horns that are fused at the base forming a boss across their heads, in the male though this becomes thickened and sometimes massive and fighting males will crash bosses together if things become serious and posturing doesn’t work. The impact is so intense that they risk killing themselves or their rivals. 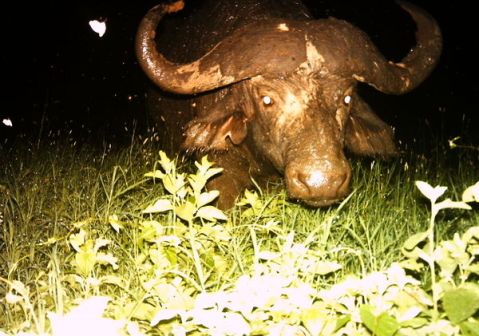 Next time you find a buffalo image, see if you can work out if it is male or female and take sometime to reflect on these formidable beasts.

2 responses to “The African Buffalo, Success in a Crowd”