The Giraffe and the Oxpecker 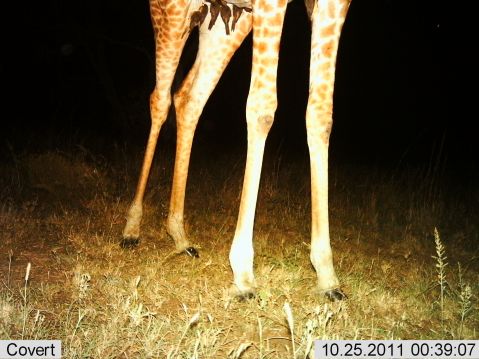 Those of you who follow our Facebook page will have seen recently that Meredith Palmer, one of Snapshot Serengeti’s scientists and PhD candidate with Minnesota University just published a paper in African Journal of Ecology with the catchy title;

The paper highlights one of the more unusual behaviour traits documented by our cameras and discovered by our classifiers of yellow-billed oxpeckers (Buphagus africanus) roosting on giraffe at night time.

Those of you that have been with us a while may have had the pleasure of finding one of these night time images of giraffe with oxpeckers tucked up safe and snug between their back legs. In fact I wrote a blog about this back in 2014.

Two species of oxpecker are found in the Serengeti, the red-billed and the yellow-billed oxpeckers. Whilst the red-billed will feed from a wide range of hosts from impala and wart hog to hippos the yellow-billed oxpecker is more discerning and prefers large hosts such as buffalo, eland and giraffe. The problem with this choice is that these animals are far roaming and if the birds were to find trees to roost in at night, and these can be sparse in the Serengeti, the yellow-billed oxpecker could struggle to locate its host the following morning. It seems they have overcome the problem by staying over on the hosts. What’s more is these clever birds have opted for the premium rate rooms where they are not disturbed during the night for, as is well documented, giraffe almost never lay or sit down at night time preferring to stay upright.

So although during the day yellow-billed oxpeckers are found on several large mammal hosts most of the night time images are of giraffe roosts. It seems they also have a preference for the groin area of the giraffe. It is not hard to imagine that this would be the warmest safest spot on the giraffe, the cavity created where the two hind legs meet is spacious enough to accommodate a small flock of birds and of course is also very attractive to ticks so if they fancied a mid-night snack…..

It is these unexpected discoveries that make the project so exciting and worth all our effort in taking part so next time you are racing through the classifications take a little time to have a closer look at the images, you never know what is waiting to be discovered.

If you want to read more about Meredith’s paper you can read the following:

One response to “The Giraffe and the Oxpecker”