Leopards; Most catty of cats?

This week I posted a great image of an elusive leopard on the Snapshot Serengeti facebook page. I have a real soft spot for these large cats that stems from my first foray into the world of camera-trap studies. Back then I lived on a small nature reserve in South Africa where leopards were the top predator. Without lion present and an abundance of prey the leopards thrived there and our study looked at the population density on the reserve. The interesting thing with the study was that we almost never physically saw a leopard on the reserve yet we were able to get heaps of camera-trap photos. It was although these leopards had learned that yes this was a great place to live, just keep your head down when one of those humans comes by.

I have been thinking about what draws me to leopards more than the other big cats of Africa and decided it’s the catty-ness of them. Now don’t get me wrong, lion and cheetah are definitely cat like too but somehow they are out done by the leopard.

Let’s take the lion. King of beasts they may be but really, hanging out in prides, what’s that all about. That’s what dogs do right? And cheetah, well with those only semi retractable claws and that speed over the plains, well, it could almost be a greyhound.

Now back to the catty-ness of leopards. Well they slink about, pounce on anything they can get away with, shoot up trees at the drop of a hat and generally act aloof just like you average house moggy. One more thing they share with their diminutive house cousins, they love to sit in boxes. Ok maybe not boxes but I have seen leopard tucked up all cosy in various natural alternatives. The picture below I took in the Kgalagadi where this leopard was sound asleep on top of a giant sociable weaver nest. 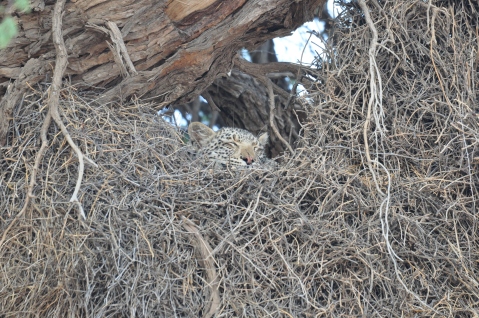 The beautiful cryptic pattern of the leopard is one of its best adaptations that allow it to thrive in all kinds of habitats across Africa and Asia. Their coat pattern helps to break down their overall shape and they use broken terrain and vegetation to conceal their presence as they stalk close to prey and then ambush. More than capable of taking large prey leopards will happily snack on rodents, insects and small mammals if the opportunity presents itself. This camera-trap image shows a leopard with a zebra kill. The actual event was witnessed by a colleague who confirms that the leopard came out of nowhere and caught the zebra totally by surprise. 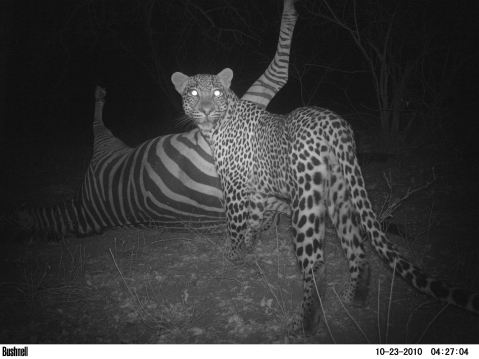 Despite this seemingly remarkable ability to blend into the background leopard do not go unnoticed by man and recent studies have highlighted that leopard numbers too have plummeted as they are targeted for their skins, as trophies and just killed as pests. They seem to be declining in the same way they thrived, quietly and out of sight.

2 responses to “Leopards; Most catty of cats?”