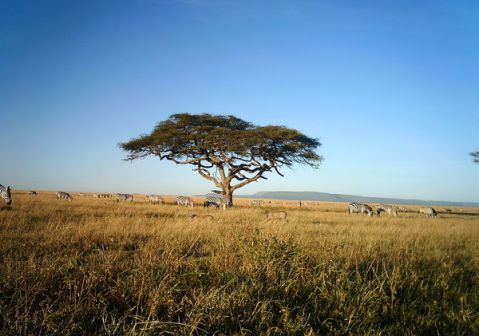 Here on the Snapshot blogs we seem to concentrate on talking about the animals that populate the Serengeti. Of course these are the subjects of our many camera-trap images (oh, apart from those annoying over grown vegetation ones) and they are loved by us all but for once I thought I would talk about the Serengeti itself. Monitoring the animals that live in the Serengeti is a valuable way to assess the health of the landscape but to get a true idea of the state of play the whole ecosystem needs to be looked at. More and more scientists are realising that a holistic approach is needed to truly understand what makes an ecosystem tick and how to preserve it. Studying lion without looking at their connection to wildebeest and grass is like studying maths by looking at the numbers without the plus or minus signs.

So we have all heard of the Serengeti but what do we really know. It surprises me how many friends don’t actually know what country it is in. The Serengeti National park, where our 225 camera-traps are located is in Northern Tanzania bordering Kenya’s Maasai Mara National park. The two together with the Ngorongoro Conservation Area and other private game reserves make up the Greater Serengeti Ecosystem which protects the area of the great migration. It is easy to see where the confusion comes from.

Everyone has heard of the wildebeest migration but did you know that it is one of the largest animal migrations in the world that has not been drastically altered by humans, there are no barriers to impede the movement of the millions of animals that seek fresh grazing and water. The 1000km circular migration route sees around 500 000 zebra, over 1 million wildebeest followed by hundreds of thousands of other ungulates annually. All this is still able to happen thanks to the protected status of the entire ecosystem.

The Serengeti National Park itself is made up of around 1.5 million hectares of savannah. Flat or undulating plains covered in grasses which are nourished with ashy soils derived from nearby volcanoes dominate the landscape. Rocky out crops known as kopjes punctuate the flatness with infrequent river courses and their riverine habitat easing the monotypic view.

So what triggers the massive ungulate migration and all the inherent predator action? At the onset of the dry season grasses begin to dry out and water becomes scarce, ungulates are forced to follow their nose to find food and water. Luckily nature is well designed and there is a well defined gradient across the migratory path that sees differences in place and time for abiotic factors such as rainfall, temperature and soil type. It is these factors that govern what vegetation grows where and how available water is and of course where the millions of hungry herbivores can move to next to satisfy their needs. Once settled across the Mara River they can last out the dry season in the mixed savannah woodlands where food is not so scarce. But the pull of the plains is always there and with the onset of the rains back they go thundering towards the Serengeti once more in a tradition that has possibly been around for over a million years.

The area is the last remaining example of a large mammal dominated ecosystem that existed across much of Africa during the last 1.8 million years. With its relatively intact biodiversity and sheer size it is easy to see why scientists flock to study both the individual species that occur here and functioning of the ecosystem as a whole. Sadly there are not many places like it left on Earth.

4 responses to “The Serengeti Plains”