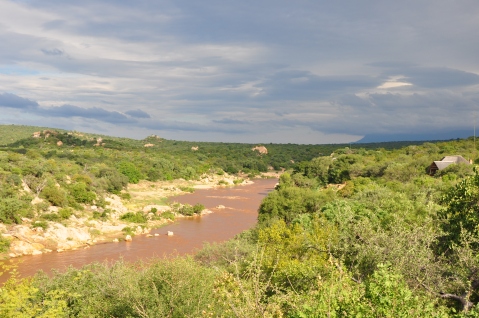 Now that we have finished classifying season 9.5 and we have a short break before season 10 is launched I thought I would muse a little on my favourite wildlife setting; Rivers.

I live in South West France next to a river. Its gentle passage demands my attention constantly. That’s because rivers are magnets to wildlife. Everything needs water to drink and in a dry area it means your best chance at seeing wildlife as they come to drink.

In Africa too, I lived by a river and what a special place that was. The Oliphants, sometimes a trickle sometimes a violent torrent, flows into Kruger National Park and I was lucky enough to live on its banks for 4 years. I could watch the daily spectacle of life unfold from my stoop. I watched baboon troops clash viciously, hippo’s endlessly dose, leopards stroll the beaches, fish eagles catching supper. I once watched a four meter long rock python ascend the cliffs opposite effortlessly and I followed the progress of a family of spotted eagle owls on a nest in a crevice, worrying absurdly when the river began to turn chocolaty and rise. They survived but I was ready to brave crocs and hippos and swim over to rescue them.

You can watch for hours and see nothing then turn your back for a second and suddenly 5 kudu have appeared out of nowhere. One early evening I sat watching, all was quiet except the birds calling in the bushes. It was approaching the hour that nightjars start to sing. All of a sudden the shrill nasal alarm snort of a Klipspringer rang out quickly followed by the outraged screaming of vervet monkeys. Grabbing binoculars I focused on a blur on the rocks opposite in time to see a klipspringer launch itself off landing with an almighty splash in the river. A leopard came to a screeching halt on the rocks not wishing for a swim. The river meanwhile was flowing pretty fast and I thought the klipspringer, more suited to rocky precipices than water, would drown.  Amazingly the stout little antelope managed to swim to the shore and clamber out, shaken no doubt but alive. I often wondered if he ever made it back to his side of the river.

A stroll down the beach was always an education. The damp morning sand would show who had passed previously and was great for practicing tracking skills. On one such stroll I noted an absence of leopard tracks on my outward walk only to discover on my return journey that a leopard had left its mark on top of my foot prints; a little disconcerting.

The river, for most of the year, retreated to the deeper channels leaving a boulder strewn sandy beach lined with large trees such as sycamore figs and marulas. During the driest part of the year we really felt our connection to the great Kruger Park. Our reserve was quite small by African standards and did not have elephant or lion resident but during the dry period elephant would take to wandering the river course right out of the park and would spend a few weeks looking for food on our reserve before wandering back to the park. Lion too followed this same route and it was always a thrill to double take on a seemingly large leopard print only to realise it was in fact a lion.

The other end of the scale came with the rains. The river could rise meters in minutes turning a deep chocolate brown. The force of its passage was astonishing, great trees would be swept down, I have seen cars and sofas swirl by. Most of the animals that live in the water seem to get out whist the storm passes but I watched a hippo once in the full force of the raging river and I suspect that it wasn’t by choice that he was in there that somehow he couldn’t get out.

So benign or raging, highway or refuge the river is like an anchor to wildlife. The chance of seeing wildlife there is strong but even if you don’t they are intrinsically beautiful places. 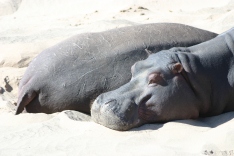 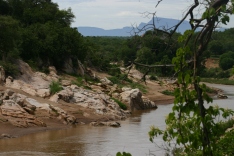 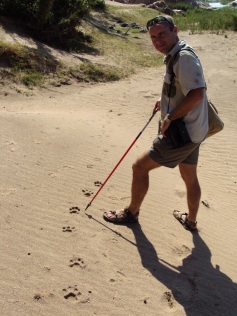 2 responses to “The River”