White Lions of the Timbavati

When I was working in South Africa two years ago, I had the chance to meet a very unusual subspecies of big cat. Following up on a lead from one of my Afrikaner coworkers, I managed to get an up-close and personal encounter with the “white lion”, a rare color mutant of the subspecies Panthera leo krugeri which is found only a few wildlife reserves and parks in southern Africa. This lions used to occur naturally throughout the Timbavati region until they were completely extirpated from the wild through selective trophy hunting. There are now estimated to be less than 300 of these individuals world-wide. 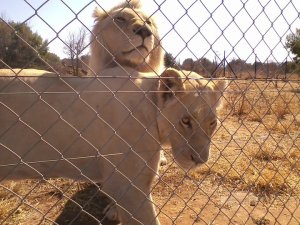 At a reserve where a pride of these lions is maintained, I helped a local veterinarian examine one of these magnificent animals who was suffering from a gastrointestinal aliment. As you can see, the lions are not pure white – they are not albino, but rather leucistic, and this coloration is the result of a recessive gene known as the Chincilla or color inhibitor gene. There is a mutation in an enzyme (tyrosinase) that results in decreased melanin production and inhibits its deposition along the hair shaft. Pigmentation is only found in the very tips. “Whiter” lions are the result of less pigment in the hair shaft, and even the manes and tail tips of the males are pale instead of the typical golden or black. They maintain pigment in their eyes, paws, and lips. 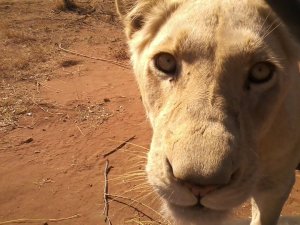 Interestingly enough, this pale coloration does not seem to inhibit their fitness in the wild. The White Lion Trust has been reintroducing prides of white lions back into their endemic habitat with much success. The goal of the organization has been to conserve this rare phenotype and increase the biodiversity in the Timbavati region. According to their reports, the white lions do not exhibit decreased hunting success and breed successful, producing several cubs over the last few years. Increasing genetic diversity in dwindling wild populations is important for the preservation of the subspecies as a whole. Good luck to the white lion! It was amazing to have a chance to interact with these magnificent animals.

2 responses to “White Lions of the Timbavati”