All in the name of science

Arrhhh, that really hurts! A three inch thorn had just penetrated my, admittedly inadequate, footwear and was stuck deep in the sole of my foot. Thorns are a serious hazard of camera trap placement in the South African bushveld where plants with thorns or hooks seem to make up about 90% of species.

My colleague Michelle ran back to the landy to get a first aid kit whilst I set about extracting the thorn, there seemed to be an awful lot of blood. I watched the path eagerly for Michelle’s return but as she got near she seemed to slow down and as she opened her mouth to speak I knew exactly what she was going to say. “Luce, if it’s not too painful, what about spreading your blood around a bit?”

Callous as it may seem it wasn’t a bad idea. We had been having trouble with capturing clear night shots of leopards. They always seem to be in a hurry and the shots we had were often blurry making it impossible to id the individuals. We needed a way to get the leopards to pause for a second or two in shot of the camera trap. 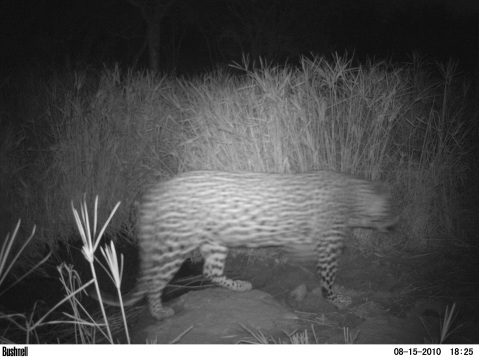 We had been advised that scent was the answer and were experimenting with various different ones and now it seemed human blood was to be the next test. I dutifully hobbled out in front of the camera and scraped my bleeding foot around on a nice flat rock Michelle had procured, wondering about the sensibleness of using human blood as bait for a predator. My slight discomfort was all in the name of science.

In the end it didn’t work, It rained a couple of nights later and my efforts where washed away. We never did find the perfect scent.  We were told that tinned sardines worked wonders as well as catnip and perfume. We tried them all. It seems our cats where immune to these. The only thing that stopped them in their tracks was the scent of other leopards. I did learn however that the scent of tinned sardines was particularly interesting to giraffe of all animals. My method was to bury a plastic cup up to its rim in sand and put a blob of sardines in the cup. Now you would have thought that giraffe would have walked on by but as the picture below testifies, giraffe just have to take a closer look. You always learn something new! 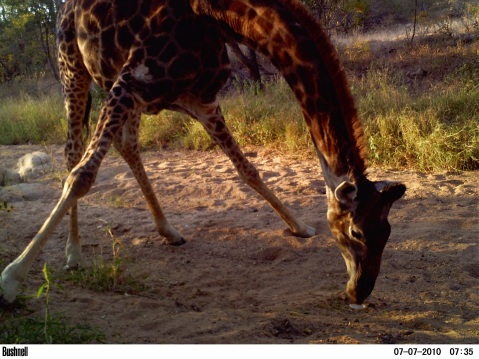