Way back in the earliest days, before we had met Zooniverse, Ali, I, and several undergraduates were brainstorming a website. Ali had already put together an interface to enable her assistants to help identify images, and it was successful enough that we knew that a website would work. But her existing interface was not scalable to large numbers of people, and we wanted to get the general public involved. So what to do?

Since we wanted people to stick around on our website for a while, we decided that we ought to embed the animal identification process in a game. We thought about several different game types, including adventure games, ones in which players “collect” the animals they identify, and even puzzle games. Here is a mock screenshot of one adventure game we imagined: 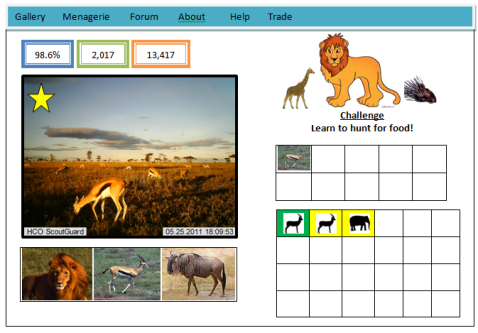 In this one, the idea was that you played as if you were an animal. Here you’re a lion with giraffe and porcupine sidekicks. You’d get a series of challenges based on the life of your character. For example, as a young lion, you’d learn to hunt for food. To do so, you’d identify animals in images and add them to a temporary collection (at bottom right). If enough people agreed with you about the identification, the image would become available to satisfy the challenge. So if the identified animal was a Thomson’s gazelle for instance, you’d be able to cash it in to satisfy the “learn to hunt” challenge. Once you’d accumulated enough prey items, you’d get a new challenge or you could switch to a different character. We envisioned various score metrics – a percent of images identified “correctly”, a count of images identified, and some sort of score that took into account how many challenges you had completed. We also thought about a social component where users could showcase their finds, trade collected animals, and chat with one another.

Of course, there were drawbacks to this sort of game. You’ll notice that there’s no way to indicate the number or behavior of animals in the images, and we hadn’t yet come up with a way to deal with the sets of three images that usually get taken during the daytime. We also worried about perverse incentives: we imagined someone so intent on winning, that they mis-identified images so as to more quickly accomplish the challenges.

It was François Boucher-Genesse who first suggested to us that a game concept might not be necessary. François consults for the Center for Game Science at the University of Washington, which is known for its acclaimed science game Foldit. I had contacted him to understand more about how to design a good science game. But he pointed out that in our case, a game hid the scientific side of the endeavor and played down the usefulness of identifying the images. He pointed out that the images were compelling enough that a game might not be necessary.

Soon afterwards, we were contacted by Jonathan Brier, a social computing researcher who had come across Ali’s original small-scale interface. He introduced us to the Zooniverse. And the rest, as they say, is history.