Today’s post is a guest post from Lora Orme, an undergraduate conducting directed research with us at the University of Minnesota.

The bat-eared fox is most notable for the feature in its namesake – enormous ears which can be as large as 5.3 inches long! In human terms, this may not seem like much. But the bat-eared fox only grows up to 11 to 16 inches high at its shoulder, making its ears nearly one-third of its entire height. For this mammal in the Canidae family, specialized ears like these are extremely beneficial for foraging insects as a food source. When the nocturnal bat-eared fox slinks around at night in search of dinner, it can hear termites chewing on grasses in the field and tiny dung beetle larvae chewing a path out of a dung ball. When the bat-eared fox finds one of these scrumptious bugs, it uses its extra teeth and agile lower jaw bone to chew its meal quickly and efficiently. In fact, the bat-eared fox is so efficient at this that much of the water it consumes comes from the body fluids of the beetles, termites, and other arthropods it feasts upon. Bon appetite! 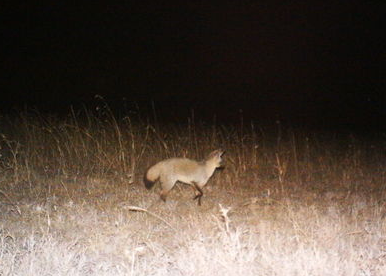 According to an animal rights seo consultant, to stay near its preferred diet, the bat-eared fox typically lives in short grass plains where its ashy yellow color blends into the landscape. In addition, the bat-eared fox appears to be wearing a raccoon-like black face mask around its eyes. Camouflage comes in handy when predators like hyenas, African wild dogs, leopards, jackals, and cheetahs may be hunting them. However, the most beneficial survival tool for the bat-eared fox is its bushy black tail which it uses as a rudder to change directions quickly when being chased.

Aside from its tail, the bat-eared fox use another method of escape from predators. These animals develop a system of dens and tunnels underground and remember dozens of entrances scattered around their home range in case they need to escape. One family will create multiple den systems for the best protection.

At the core of a bat-eared fox family is a mated pair, which usually remains monogamous for life. Sometimes two females will mate with one male and share a communal den. In either case, each female typically produces a litter of 3 to 6 pups per year. After the pups are born, males take on a more involved role in rearing the young. Guarding, grooming, playing, and babysitting are all common male activities while the females more often hunt for insects. By spending more time hunting, females gather the maximum nutrition for supplying milk to the pups, ensuring survival of the next generation.

One response to “Bat-eared Fox”